Hi there! This is the last time I wrote here!

I hope you enjoyed my trip through GSoC 2017. It’s been an awesome journey of 3-4 months together.

Thanks to both of my mentors @Adrianzatreanu and @yukiisbored . Thank you for everything! I couldn’t think of better mentors than you guys! Also I want to Thanks to coala organization, thank you for accepting me in the GSoC program!

Finally, Thanks Google! for such a wonderful program!

What I have done with this project?

With my project Improve the coala CLI I solved bugs, add new functionalities and change the aspect of the output for the user.

This is the latest ouput for the user. 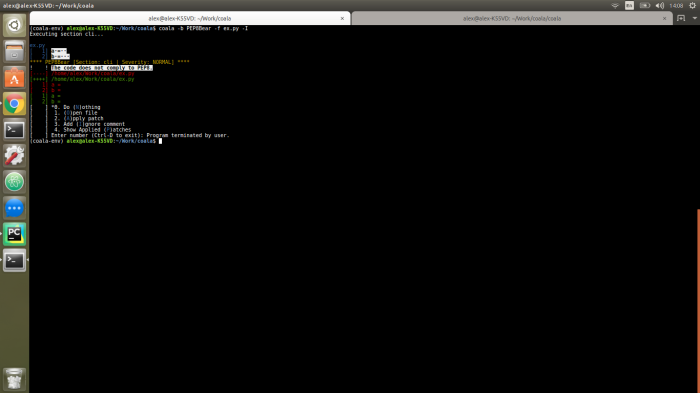 Bug with colors for different terminals. (This is LXTerminal) 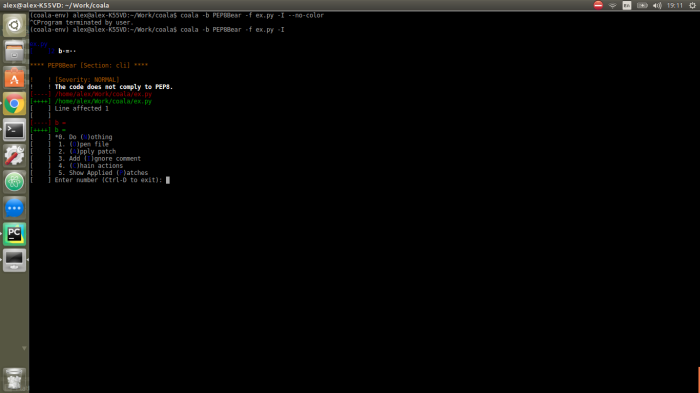 Right now Do (N)othing is an action because of a6c376f.
Chain Actions is right now by default. You can now apply multiple actions in a single input 0911078.
Apply single actions was added. You can use flag -A and choose an action to apply for every result 65feb30.
Show applied actions print the latest actions that a user has done in a run of coala 149d59d.
Generate patch action generates a patch for a file based on bears depending on what language did you used in the file 25e019c.

What has been done?

Aim of the project

With this project we’ve tried to improve the user experience of coala in CLI. Many hours were spend trying to improve the design of it and we hope it’s better. Of course, anything can be improved over and over again.

I worked just in coala repository from github. Most of the work was done in ConsoleInteraction.py file were I did major changes. Other changes were made by adding new files for every new action and tests for all of them.

I think that the most dificult think was to have 100% coverage from tests. Also I tried to wrote good, clean code that new people could understand it.

What I’ve achived so far:

Also, I’ve reviewed many prs in this period of time!

I hope all of my GSoC collegues finish their assignements in time as I hope to do it!

I’ll make a last post at the end of the phase! I hope I see you there, reading it!

Have a nice time!

As the title says, I’m on Phase 3! Right now I want to add again Executing section <section>... . This was deleted when I changed the ouput. The feedback was that this should be added back.

Then, I want that Chain actions be by default for users. In this way the user can choose to apply a single or multiple actions.

And the last think I want to add is Generate Patches. When you choose this action, you can apply more patches that are different. Something like Apply the patch ('capitalize') and so on (mockup)

I added something pretty cool, a history of actions that was applied in a run of coala. I think it works nice. Also, I written API documentation for all of my variables that were used.

I found that it’s really hard to write good code and also good commits messages (my english isn’t that good). For ShowAppliedActions ( history) 1st time I writted bad, because I should only write code in the file designated for that action.

I hope that I’ll finish in time. I want to say thanks to my mentors Adrianzatreanu and yukiisbored for the help!

I already merged Chain Actions. With this you could choose a set of actions and apply them in an instant. Easy to use right? After you choose this action you will be asked to provide a string made of actions, something like am. a means `(A)pply patch` and m Print (M)ore info. Cool, right?

Today I want to merge 2 more. The 1st of them will ask you if you want to do more actions after you already choose an action. The last one is a flag -A or --single-action. If you choose this flag, you will be asked to choose a single action and apply it all over the results.

I have only one last pr, for this Phase. This one will print for you all the actions made in a run of coala. I think it’s really nice to have something like a history of your applied actions.

This day is the last one for the Phase 1 where we should merge our prs and close our milestone for Phase 1 of GSoC 2017. It’s an exciting day as I finished my work in time. I hope that all of my coala mates does that too.

What we achived in this period are you thinking?

Thanks to my mentors @Adrianzatreanu and @yukiisbored . Without them I couldn’t do this!

That’s for this day, I hope you enjoy the summer as I do!

So, the Phase 1 has begun. I started already implementing the mockup that I and with my mentors designed it based on the feedback from the community. I think it looks awesome!

Well, this isn’t easy. I had exams until 16 and I couldn’t do all the work that I would wanted to do for the project. The most problematic think are the tests. They really put you on a difficult position because sometime you don’t understand why it passes/not passes.

I rewrite my code quite a few times. Today was about breaking the pr into smaller prs to be merged faster. Rest asure, I’m doing my work.

The deadline for the Phase 1 is on 26 so I should start merging the prs that I was working on. I think looks good (maybe minor changes can be made). The problem with the tests is that you need to have 100% coverage of your code and that’s really hard. You need to test everything that you added. I like it!

Well, from now on we will see us 2 weeks from now! I hope you enjoy reading it.

Have a nice week. Bye!